It has always nagged at me that there are no known, extant, portraits of Col. William Prescott, as an individual sitter, and as he looked in the days of his military service.

Chalk it  up to the fact that Prescott lived a simple, unpretentious life, in an era in which few Americans could or would pay to have such things as portraits made.

Note, though, that Prescott was portrayed in a group painting: The Surrender of Burgoyne, by John Trumbull, 1821.

Here is the painting, followed by a key to who is who… 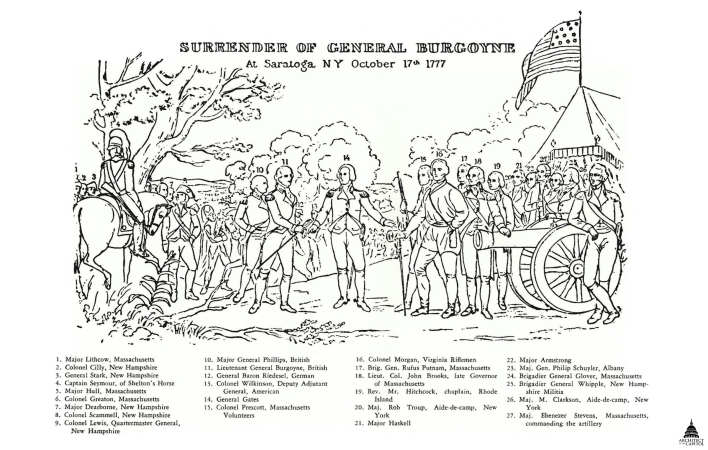 According to the key, Prescott is  No. 15, but somewhat frustratingly, he is obscured, on his whole left side, by No. 16, Colonel Morgan of the Virginia Riflemen.

Still, we get a glimpse…

Here’s a slightly closer look, cropped more in the format of a traditional portrait.

This is definitely a partial success. A portrait, or sorts, however obscured, of Prescott!

But…here there is an apparent snag… The Trumbull painting was completed in 1821, and Prescott died in 1795. So, at the time the work was created, the subject in question had been dead for twenty-six years. Good grief.

I mention it because I think it’s actually  only an apparent snag, and hope comes from two facts:

First, multiple sources tell us that Trumbull was scrupulous in seeking out the true likenesses of his subjects for his famous series of Revolutionary War paintings. Where the subject was not alive, he used pre-existing portraits, and where those did not exist, he used relatives who were said to bear a close resemblance.

Second, and more promisingly, Trumbull was actually present at the surrender of Burgoyne, on Oct 16, 1777, and made a detailed sketch of the event– in real time. (Source: The National Capital, Past and Present: The Story of Its Settlement, Progress, and Development, by Stilson Hutchins, Joseph West Moore, 1885.)

So, is the Prescott likeness in Trumbull’s painting an infallible representation of the man’s face? Perhaps, perhaps not, but it is an image based on a visually talented eye witness who cared deeply about historical accuracy. In other words, I think it is as close as we are going  to get, and there is every reason to believe the representation is reasonably good.

In the six months since I discovered Trumbull’s painting, and the fact that it answers old questions about the colonel’s appearance, I confess I have been bothered by the presence of Col. Morgan, the fellow in white.

It sure would be nice to have a clear view of our ancestor.

So, I recently thought, how about making  one? Photoshop to the rescue…

Here’s the series I came up with. Because people may differ on which version they prefer, I’m just going to show my entire work process:

Stage 1: Get rid of Col. Morgan, and roughly block in the clothes and background. 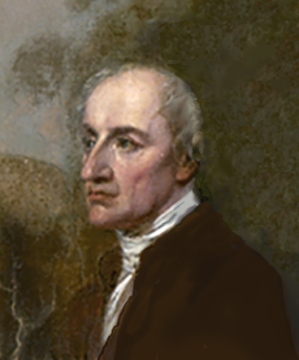 Stage 2: Crop it to something little more manageable, and start to adjust light and dark.

Stage 4: Subjective alterations. Clean it up a little. Add back a hint of a ponytail.

Stage 5: More subjective alterations. A little less glare on his forehead. Blend the folds of the cravat. Fade the background.

OK, there it is… Seems pretty reasonable. Note, the successive alterations never change anything about Prescott’s features. I just got rid of the offending  figure blocking him, and gave it all a traditionally dark “museum gravy” formed by 150 years of candle smoke and burnt roast.

And now we have a portrait of Colonel William Prescott, perhaps as Trumbull might have painted  him for a miniature.

Cheaper than finding it in an auction at Sotheby’s. 🙂

2 thoughts on “Reconstructing a Portrait of Col. William Prescott”