Eventually, in the mid-19th century, the citizens of Worcester rediscovered Timothy Bigelow, and decided to right the wrongs of his death with a memorial.

The following is a contemporary description of the events surrounding the dedication. It includes, in addition to lists of all the dignitaries and fire companies and Bigelow relatives present, a detailed description – in typical 19th century fashion – of the exhumation of his grave, and the careful inspection of his remains.

Reading it, you can almost imagine how Mark Twain would have described the affair. How times had changed! I wonder what the Colonel  would have thought.

and originally from History of Worcester, Massachusetts: From Its Earliest Settlement to September 1836, by William Lincoln, published in 1862.

Whereas, by a resolve of the City Council, passed Dec. 23, A. D., 1859, leave was granted to Timothy Bigelow Lawrence to erect a Monument over the remains of Colonel Timothy Bigelow; and, by said resolve, the Mayor was empowered to designate a suitable lot for that purpose, where said remains now lie, — the same not to include the remains of persons of any other family; and it was further resolved, that said lot be forever appropriated and devoted to said purpose —

Now, in pursuance of the authority in me so vested, I, Alexander H. Bullock, Mayor of the city of Worcester, have designated, and do hereby designate, for the purpose aforesaid, the following-described lot, being twenty feet square, and being section number four of the second division, as laid down on the plan of the cemetery on the Common, dated October, 1853, made by Gill Valentine. Said section has a stone monument at its south-east corner, and contains grave number seven, being the grave of Timothy Bigelow, but does not include the remains of any other person.

And I hereby forever dedicate and appropriate said lot to the purpose aforesaid.

In witness whereof, I have hereunto set my hand, and affixed the seal of the city of Worcester, this thirtieth day of December, in the year of our Lord one thousand eight hundred and fifty-nine.

It occupies a conspicuous position at the northerly front of the ancient cemetery, an inconsiderable but beautiful elevation, planted with trees, overlooking and now forming a part of the Central Park, better known as the Old Common, of Worcester.

The site of the monument is a space of twenty feet to a side, enclosed with a light iron fence, on a granite plinth with trefoiled piers. From this, a slope of grass is formed to a solid block of granite, nine feet square, upon which the monument is erected.

The design is in the style of the English Gothic of the thirteenth century, and the material is white Italian marble. The pedestal is ornamented at its angles with carvings of rams’-heads, and bears on its sides the following inscriptions: —

On the front, in raised capital letters, —

On the right face, in sunken letters, —

The Colonel of the I5th Massachusetts Regiment

Of the Continental Army

In the War of Independence,

Is erected by his great-grandson,

On the left face are the words, —

Above the pedestal, the monument diminishes in size; but from each of its four sides trefoiled canopies project, supported on columns whose capitals are elaborately carved with various designs, their bases resting on the shelving top of the pedestal. Above the canopies, the shaft again diminishes in size. It assumes an octagonal figure, and is surmounted with a foliated cross; the total height being thirty feet.

The marble base of the monument is made up of four massive pieces that were constructed to leave a central space between the block of  granite on which the monument stands. Within the cavity a time capsule of two boxes were stored.

The monument was designed and superintended by George Snell, Esq., architect, of Boston. The granite work was executed by the Granite Railway Company; and the marble, imported from Tuscany, was chiseled by Messrs. Wentworth and Co., Boston.

The following officials constituted a Committee, on the part of the City Government of Worcester, to take action on the measures deemed suitable for a public notice, by inaugural exercises, at the erection of the Bigelow Monument; viz. : — His Honor Mayor Davis; Messrs. George Hobbs and Charles B. Pratt, Aldermen ; Messrs. Walter Bigelow, Frank H. Kelley, and M. S. McConville, Councilmen.

The original grave of Colonel Bigelow was within the area allotted to the monument.  It was necessary during construction to exhume the casket and move it to its current location beneath the base of the monument.

The Colonel’s remains were found to be incased in a metallic casket. They were remarkably well preserved after 71 years of interment.  His hair was said to be abundant and of singular freshness. His frame indicated a robust man taller than the average man. This corresponds with earlier descriptions of Colonel Bigelow being six feet two inches tall.

A week before the city celebration dedicating the monument, a private formal ceremony took place and a time capsule of selected items and documents were placed into boxes made of tin and copper. They were firmly soldered against the elements of time.

The pageant of the day, although not wanting, had less of the brilliancy anticipated, owing to the necessities of the Civil War. The military was honorably represented by the senior members of their corps. The elder exempts of the Worcester Light Infantry alone numbering about one hundred. They made a fine appearance.

The Sixth Regiment, had left to aid in the defense of Washington; and, at the very hour of the dedication of the Monument, were bravely fighting their way through Baltimore.

The procession was formed at eleven o’clock, adjacent to the Central Park. Pausing at the mansion of  Mayor Davis for review by the invited guests and other distinguished citizens there assembled,  In the first carriage were seated Mayor Davis, Colonel Lawrence, Tyler Bigelow, Esq., of Watertown, (nephew and son-in-law of Col. Timothy Bigelow), George Tyler Bigelow, Jr., son of the Chief Justice. They were followed by a carriage containing Ex- Governor Lincoln, Rev. Dr. Bigelow, and Hon. John P. Bigelow, Ex-Mayor of Boston. The past Mayors of Worcester, and guests of the city, occupied the remaining carriages.

The procession was arranged as follows:

Past and exempt Members of the Worcester Light Infantry,

bearing the Colors of the Company ;

Advancing through the central street, the route was in the following order: through Main, Highland, Harvard, Chestnut, Elm, West, Pleasant Streets, to the head of Main Street again, and on to the Old Common. At twelve o’clock, a salute of thirty-four guns was fired. The procession forming in a square around the stand, General George H. Ward, Chief-Marshal, announced Mayor Davis as President of the day. Among the notables on the platform, besides the gentlemen elsewhere named, were the Hon. Rejoice Newton, Stephen Salisbury, Esq., Hon. Dwight Foster, Hon. George F. Hoar, Major-General Hobbs, Colonel Stoddard, Charles Hersey, Esq., Walter Bigelow, Esq., Abbott Lawrence, Esq., with others. After a music by Joslyn’s Coronet Band, a prayer was offered by Rev. Dr. Hill.

The following song, written for the occasion by C. Jillson, Esq., was sung by the Glee Club, under the direction of the music’s composer Albert S. Allen.

We come to day, with solemn tread,

To consecrate an earthly shrine,

And raise this column o’er the head

Of hero, patriot, and divine,

A hero in his country’s cause ;

A patriot on the lists of fame ;

Divine, because an honest man

Can justly own no other name.

A thousand other men have died,

Who toiled for fame, and sought renown ;

But no one knows their resting-place,

On hill, in valley, or the town.

But here the humblest of them all

Beneath this beauteous column lies;

His dust has unto dust returned ;

His spirit, to the upper skies.

With laughing footstep o’er the hills;

When Nature lifts her wintry hand

From all the valleys and the rills,

Shall generations yet unborn

Beside this marble column stand.

And mingle with the dust their tears

For one who loved his native land.

How sleep the brave, who sink to rest

With all their country’s wishes blest!

Tyler Bigelow, Esq., of Watertown. nephew of the Revolutionary colonel was presented last. At eighty three years of age he stood, firm and erect, as if he were a younger man. His remarks were few and were delivered with great energy.  He wished to relate an interesting reminiscence of his late uncle:

“When the news of the destruction of the tea in Boston Harbor reached Colonel Bigelow, he was at work in his blacksmith’s shop, near the spot now called Lincoln Square. He immediately laid aside his tools, proceeded directly to his house, opened the closet, and took from it a canister of tea, went to the fireplace, and poured the contents thereof into the flames. As if feeling that every thing which had come in contact with British legislative tyranny should be purified by fire, the canister followed the tea; and then he covered both with coals. So well known and determined were his opinions on the great questions of the day, he returned to his labors without deigning a word of explanation or apology to any one.”

Music by the band ended the presentations by guest speakers. A benediction by the Rev. Dr. Hill, concluded the public ceremonies of the day.

After the close of the ceremonies the invited speakers at the dedication of the Monument were entertained at an elegant banquet given by Governor Lincoln. 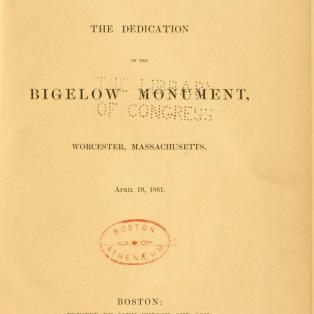 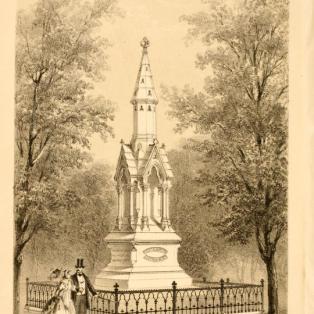