Joseph Weld is buried here. Along with many others of the early colon.

“This is Roxbury’s earliest cemetery, established in 1630. The burying ground is named for Rev. John Eliot, Christian missionary to the native peoples of the Neponset. Eliot is buried in the Parish Tomb, along with other early ministers of the First Parish of Roxbury. Two colonial governors are interred in the Dudley family tomb, which dates from 1653. Members of the renowned clockmaking family, the Willards, were buried here in the 1840’s when Roxbury was a manufacturing center.”

END_OF_DOCUMENT_TOKEN_TO_BE_REPLACED

William Fletcher Weld was one of the true merchant princes of Boston’s golden age. In looking for material on him, I wasn’t able to find any of the funny stories, or strange coincidences that are usually out there, just accounts of how much money he made, which at his death was estimated to be between US$ 17 and 20 million.

His father, William Gordon Weld, who had fought pirates and captained his own ships, died with little if any money for his family. William Fletcher then set to work to make it back, first by working in a counting house, then buying waterfront real estate, and ultimately getting into the ship-building business, and the rest as they say…is history.

The following is a brief excerpt from Isabel Anderson’s book, Under the Black Horse Flag.

THE FOUNDER OF THE FLEET

…The story of the William Fletcher Weld shipping trade is so full of incident and anecdote that it can best be prefaced by a summary of his larger accomplishments. Very early in his young manhood he bought wharf property and began ship‑building. In 1833 his firm built the largest ship of the day, the Senator, and from that time forward ship after ship was added to the list until his vessels became a fleet, and William F. Weld and Company were believed to be the largest firm of ship‑owners in America. At one time he controlled the markets for Manila and for Russian hemp. His own counting‑rooms were on 4~ Central Wharf. Eventually he took into the firm with him his two sons, William Gordon Weld and George Walker Weld. Richard Baker, Jr. was, I think, always his partner, and although they had disasters, William F. Weld continued the partnership, for he said that Baker could transact more business in a few hours than any one else could in a whole day.

END_OF_DOCUMENT_TOKEN_TO_BE_REPLACED

From the NEHGS Register… a copy of which was found in the barn in Brookline,  inscribed in pencil to Mrs. George L. Pratt, 1891.

THE family of Weld dates back to 1352, William Weld, High Sheriff of London. The New-England branch came from Suffolk, the home of Governor Winthrop.

In 1632 Captain Joseph Weld, with his brother, the Reverend Thomas Weld, being “Puritans of the Puritans,” came to New England for freedom ; not penniless adventurers, with nothing to lose and everything to gain, but leaving behind home, comfort, pros­perity and assured position, for conscience’ sake.

Captain Joseph Weld settled in Roxbury, Mass., and became a freeman in the colony, which made him a grant of several hundred acres, now West Roxbury Park. This was the family home for nearly two hundred years.

Being well trained in arms, he was a valuable aid to Governor Winthrop in military affairs, and served in numerous fights with the Indians. His death was a great loss to the colony, and is mentioned by Winthrop. Savage stated that he was the richest man in the colony, at the time of his death, and was one of the first donors to Harvard College, of which his brother Thomas was of the first Board of Overseers.

William Fletcher Weld, the subject of this sketch, the sixth generation from Captain Joseph Weld aforesaid, was born in the old homestead, April 15th, 1800. His grandfather, Eleazer Weld, was a Judge, and also Colonel in the Revolutionary War, and Paymas­ter of Washington’s army at Cambridge, in 1777 and 1778.

END_OF_DOCUMENT_TOKEN_TO_BE_REPLACED

The following, by W. Rodman Peabody, was taken from Frances Weeks Lawrence’s manuscript, and was originally published in the Bulletin of the Society for the Preservation of New England Antiquities. 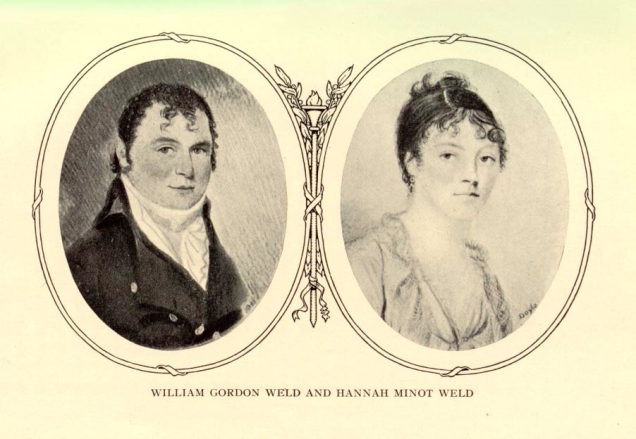 In common with so many other New Englanders, the Welds heard the call of the sea ringing loudly and persistently in their ears. By 1802 at least one member of the family was trading with Europe, in command of his own square-rigged ships. In 1802, William Gordon Weld, while in command of his armed ship “Jason” off Tunis, fought and beat off an Algerian ship, one of the terrors of the sea, and recaptured two American brigs with their crews. In 1812, his ship “Mary” was lying in the river at Lisbon. He had discharged his cargo of dried fish and barrel staves and was waiting for his factor to collect his return cargo. Nearby the English frigate “Spartan” swung at her anchor. He [Weld] was of companionable character and like all other Welds since his time regarded a good cook as one of the necessities of life. It was a natural result, therefore, that Mr. Weld and the captain of the “Spartan” formed the habit of dining with each other on alternate evenings. Eventually, the “Spartan” received orders to sail for England, and dropped down the river on an ebbing tide. Shortly afterwards, Mr. Weld, despairing of obtaining a profitable cargo, determined to return to Boston in ballast with the proceeds of his outward voyage converted into doubloons, which were packed into kegs.

END_OF_DOCUMENT_TOKEN_TO_BE_REPLACED

A few months ago, my aunt, Lee Albright, asked me what we could and couldn’t say with historical accuracy on the subject of the Weld origins of the land Allandale Farm now sits on.

I actually ended up sending her a succession of emails in reply. The problem was that I initially found multiple statements online that I credulously believed; but as I dug deeper, it became apparent that there are large gaps of knowledge. And some or much of what is available online is simply wrong.

Eventually, I came up with the following, which I think is pretty solid, historically speaking, but then again, I’ve already been wrong on this several times.

The land that is home to Allandale Farm and The Apple Orchard was given as part of a larger grant from the Massachusetts colonial legislature to Capt. Joseph Weld, in the mid-1600s. It has been continuously farmed by descendants of the Weld family since the late 19th century.

END_OF_DOCUMENT_TOKEN_TO_BE_REPLACED

This is the document to which Isabel Anderson referred, the last will and testament of Capt. Joseph Weld.

Ipswich, this second day of the fourth month. (june).

Being visited by the hand of the Lord, and not knowing what the purposes of God may be; my spirit being restless and out of quiet because my house is not set in order, I think it my duty to go about the work having first sought to God for direction; and though I cannot do it so well as I might had I been at home, yet because I know not whether ever I shall return, I do therefore make this my last will and testament as followeth.

END_OF_DOCUMENT_TOKEN_TO_BE_REPLACED

This is it—the text of the treaty the colony was so grateful for that they gave Capt. Joseph Weld the land grant. As such, it is the ultimate upstream origin of Allandale Farm, though I will have more to say about that in a later post. (Things are not as straightforward as some online sources make them seem.)

This writing is to testify that wee, Pumham, sachem of Shawomock ec. & Sacononoco, sachem of Patuxet ec., have & by these psents do volentarily & wthout any constraint or pswasion, but of or owne free motion, put orselues, or subiects, lands, & estates under the govrmt & iurisdictio of the Massachusets, to bee govrned & ptected by them according to their just lawes & ordrs, so farr as wee shalbee made capable of understanding them; & wee do pmise for our selues, & all or subiects, & all or posterity, to bee true & faithfull to the said governmt, & ayding to the maintenance thereof to or best ability, & from time to time to give speedy notice of any conspiracy, attempt, or evill intension of any wch wee shall know or hear of against ye same; & wee do pmise to bee willing from time to time to bee instructed in the knowledge & worship of God. In wtnes whereof wee have hearunto put or hands, this 22th of the 4th mo. 1643.

END_OF_DOCUMENT_TOKEN_TO_BE_REPLACED

Kinsmen and Kinswomen
Blog at WordPress.com.