“The yarns of seamen have a direct simplicity, the whole meaning of which lies within the shell of a cracked nut. But Marlow was not typical (if his propensity to spin yarns be excepted), and to him the meaning of an episode was not inside like a kernel but outside, enveloping the tale which brought it out only as a glow brings out a haze, in the likeness of one of these misty halos that sometimes are made visible by the spectral illumination of moonshine.”

I’ve often thought about these lines. And I’ve mused how they might apply, or not apply, to family history research. We look and look and look for the missing kernel of truth, the fact – the particular birth, the marriage, the death, and its dates – upon which we can build and expand and elaborate all the others that follow. But sometimes there is no kernel of truth. No one fact. Just a list of competing, though in the end not terribly different, theories. And the truth, if we are ever to know it, will be found not in one theory or another, proven correct or incorrect, but in the vague haze that surrounds all of them.

END_OF_DOCUMENT_TOKEN_TO_BE_REPLACED

In the interest of seeing that our family tree, the actual genealogical “who, when, and where” is preserved, I have placed some of the research that went into this blog on five websites, four of which actually aim to piece together, person by person, a single family tree for everyone. Taken literally, that is wildly ambitious, not to mention completely impractical, but the effort alone has already produced, flaws and shortcomings notwithstanding, a very special body of research.

These “collaborative” genealogy sites are Geni, WikiTree, WeRelate, and FamilySearch. Each is a little different.

For example, Geni and WikiTree make room for all relatives including living people and then add privacy controls. WeRelate, meanwhile, has decided to forego information on living people and just focus on the near past. Geni makes little use of sources or documentation, but WikiTree and especially WeRelate strive, with varying success, to back up all assertions with primary documents. There are plenty of other differences, but that’s the gist of it.

The main point is that putting the information here means it will survive even in generations when no one inherits an interest in family history– something I see as increasingly  likely.

Here are some jumping off points, categorized first by site, and then by a few key relatives…

Finally, I said there are five sites. The fifth is Ancestry.com, which somewhat sadly, has a paywall and curious people cannot simply click over to peruse the material at will. You can see it without a financial outlay, but to do so you’ll have to email me or Elisha Lee to be put on a list of invitees. Sorry, I didn’t make up those rules. If you are already on Ancestry, you can search for our tree which is called Kinsmen and Kinswomen (revised and sourced). [18,000 relatives and counting.] On the plus side, looking for a silver lining, the highly commercial aspect of Ancestry has paid huge dividends in making a vast trove of documents available online, including – in most cases – photocopies of originals. This includes birth certificates, marriage entries in the parish register, passport applications, draft registrations, VA records, medical examiners’ notes, high school yearbooks, biographical vignettes, and on and on. People can also share multiple digital copies of rare family photos.  There really is nothing like it for primary research.

At some point in the distant future, I’ll figure out how to put a version of our tree here, on this site, with measures in place to protect people’s privacy, but until then, the organizations above will have to suffice.

This is a transcript of the remarks by Elisha Flagg Lee, Jr. and myself delivered at Helen Swain Burgin’s memorial service, held Friday, December 14, 2001.

No more introduction is needed. 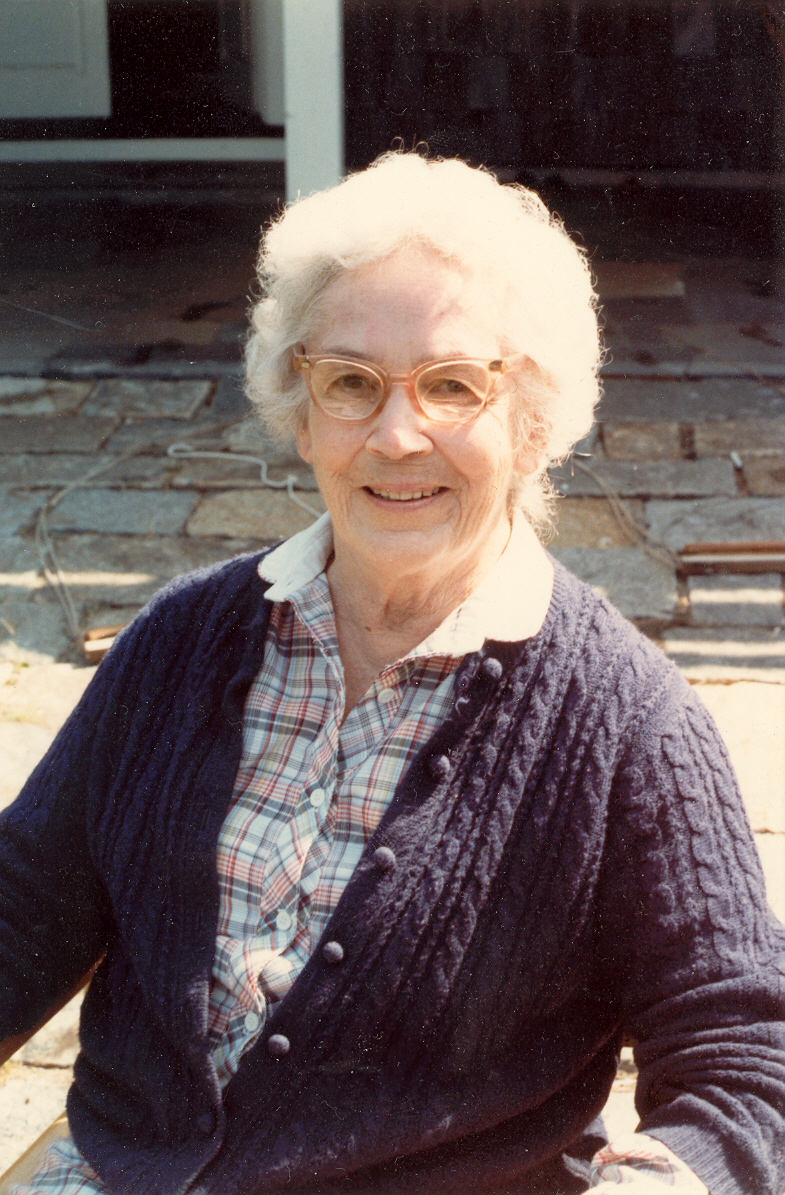 END_OF_DOCUMENT_TOKEN_TO_BE_REPLACED

Nana and Grampa are here.  In case you needed directions…

The burial itself was in the winter, a few days after he died. The night before had seen a wild and furious snow storm, but on that morning, the sky was dense, blazing blue. None of the snow had melted, and all the trees were covered in white. It looked like Monet’s painting “La Pie” [“The Magpie”]. In the sunlight, you could see people’s breath almost crack as it left their mouths and drifted up.

The memorial service, in distinction to this, was delayed to the spring. It happened on a late afternoon in April, when Milton was gray and damp and rainy. Though we had worried that the elder mourners would not leave their houses because of this, the chapel at Milton Academy was packed to standing room only. All ages had come. The air smelled of old wood, dusty stone, and wet tweed. The turning of pages, and rustling of raincoats never really stopped. My grandmother was in a wheelchair, on the right side of the aisle (looking forward), up front.

These are the remarks I offered…

END_OF_DOCUMENT_TOKEN_TO_BE_REPLACED

Thomas Skudder Burgin was my grandfather’s brother. We called him, simply, Uncle Tom. As a child growing up on the periphery of my grandparents’ lives, I never gave him too much thought. I knew he had been a politician, had a yacht, and drove large Detroit-made luxury cars. But not much more.

I knew my grandfather and his brother were terribly close. Their nightly or near nightly phone calls – brief, but consistent –  were legend, especially the ritual sign-off. “Ok, Tom. Very good, Tom. That’d be wonderful, Tom. Good-bye, Tom. (long pause) Helen, that was Tom.”

Uncle Tom’s death, coming in the midst of my freshman year at college, was a blip on my radar screen at the time. But, as the years went by, I would come to learn of his true stature, earned the hard way, day after day, doing the decent thing, and treating people well. When I recently found the edition of the Quincy Sun devoted to remembering him, I spent the better part of a Saturday reading it.

Two extraordinary men; brothers; very, very different characters, and yet each leading what some would call simple lives. Serving their communities at the local level. Getting the work done. Many, many friends. Observing life’s passage with dry, mordant, humor, and behind the barely concealed smile, a hint of sadness.

I salute them both.

Here below, are images from the actual paper, as published… Note, I am aware that the quality of the reproductions isn’t great. (If you click and open them in a new tab, you can see them full size.) But it’s worth starting with the basic layout, if only to see how much space, how many separate articles, and reminiscences, were devoted to this man’s passing. And I think this need to be said: if he had been an editorial afterthought in any sense, if the treatment of his death were simply polite, if they were just going through the motions, it wouldn’t look like this. Clearly this was someone for whom people cared deeply, and it shows.

Scroll beyond the images of the newspaper, for the actual pieces (in searchable and reproducible text).

From a six month compilation of the paper’s daily editions, available here.

END_OF_DOCUMENT_TOKEN_TO_BE_REPLACED

Tom Burgin, my grandfather’s brother, was Quincy’s beloved mayor, and a lifelong public servant of that community.

Near the end of his life, Tom Burgin put pen to paper and produced most of a memoir, which, with a little judicious editing and rearrangement, became the volume you see here.

It was “printed” in a very small run. More like xeroxed and stapled together. And, fortunately,  the sole surviving copy (that I know of) was found and saved by cousin, Elisha Lee.

This winter, Elisha was good enough to give me permission to take the pages out of their binding, and scan the whole thing, so that it could survive in electronic/ digital form–hopefully to be read in the future by people interested in the town’s history.

This little volume – really the collection of a man’s thoughts and observations on his passage through this world – almost didn’t make it.

I’m really happy that it has.

With the goal of preserving his manuscript, and getting it into the hands of others who might enjoy it as well, here is the whole text of Tom Burgin’s Remembering Quincy at 80...

END_OF_DOCUMENT_TOKEN_TO_BE_REPLACED

The following, written ten years later is more laconic, but no less revealing. I’ve returned to re-read it many times. The older I get, the more I revere this man. He has been physically dead for years, and yet not two days go by that I don’t think of him and his example. He seems, in that, alive and vibrant.

Looked at with the perspective which comes thirty-five years out of college, my life has been happy, but not glamorous; interesting, but not eventful; rewarding, but not lucrative. Some of the things that grow in importance to me with the passing of time are: the greatness of Harvard, the value of standards, people, tolerance of others’ viewpoints, humor, and forehandedness.

In the field of activities, my interests seem to be reasonably diversified among family, business, civic and educational concerns, snatched opportunities for recreational reading, golf, and my place on the Maine coast. My affiliations include…

While I could have included more of the writing by and about Grampa composed at the end of his life, I remain particularly fascinated by this piece, written for his twenty-fifth at Harvard. The collected thoughts of a man in the act of creating his life.  The comments of a player, taking a brief time-out, before jumping back into a very undecided game.

The obvious distress of the Secretary’s third request for my biography has finally got me pinned down.  The first two had the easy and rather gentle sound of the notices I send out for interest, not too long overdue,— but this third one!— “Angels and ministers of grace, defend us,”— what can any self-respecting man do but push aside the litter on the study desk, order the bewildered offspring off to early bed, and prepare to grasp the proverbial bull firmly by the horns.