END_OF_DOCUMENT_TOKEN_TO_BE_REPLACED

I have often wondered if it would be possible to discover where in Raritan Martina Elmendorf grew up. Now, I think it may be just north of Duvall Park…

…“The New Jersey branch of the Elmendorfs runs to John, third child of  Petrus Edmund and “Molly.” He was bapt. at Kingston Mar. 24, 1749, and m. Margriet (dau. of Peter and Martina [Varick] Zabriskie, of Hackensack, N.  J.) Under the will of his uncle, Evert Bogardus, John received land on the  road from Kingston to the “Gran Kil.” Evert Bogardus m. Gertrude  Crook, and was captain of one, while John was captain of the other of two companies of  militia drawn up at the Kingston courthouse when George  Clinton was proclaimed Governor July 30, 1777. John  Elmendorf appears to have married and removed to New  Jersey after the close of the Revolution, residing for a  time at Hackensack and settling eventually at Somerville. He  inherited the estate which had formerly been owned by Lord Neil Campbell,  near the junction of the Raritan and the North Branch. He and his son Edmund were among the organizers of Somerville  Academy in 1801. He died July 4, 1812. His wife was b. Jan. 7, 1750,  and d. Nov. 24, 1809.”

END_OF_DOCUMENT_TOKEN_TO_BE_REPLACED

The Lewis Condict House still stands at 51 South Street, Morristown, NJ 07960. White, with a large and spacious interior, it is home to The Women’s Club of Morristown.

A reddish plaque outside reads: “Dr. Lewis Condict House—1797—Dr. Condict, outstanding public servant, was first president of the Morris County Medical Society, congressman, and first president of the Morris & Essex railroad.” A letter on the wall of the main downstairs hallway  is from General Lafayette to Lewis Condict, thanking him for a speech given in his honor.

or get in touch at…

END_OF_DOCUMENT_TOKEN_TO_BE_REPLACED

Just before her marriage, likely mid-1907, Libby Lawrence published this piece on the island – and the community – off the Maine coast that she had known so well during her childhood.

Yes, this was, in one sense, the same timeless H&G fare. But scattered amongst the references to society bigwigs and grandes dames, and their Ozymandias-like desire to leave behind at least a trace, there are little pieces of poetry.

Taken together, they actually reveal something… not so much about Islesboro, rather, about the heart of the author.

END_OF_DOCUMENT_TOKEN_TO_BE_REPLACED

William Hickling and Susannah (Amory) Prescott’s house survives, and is owned by The Colonial Dames of America in The Commonwealth of Massachusetts, and can be visited.

END_OF_DOCUMENT_TOKEN_TO_BE_REPLACED

You can visit the house owned by William Paine, and his father Timothy (after whom it is named). It is maintained by the Daughters of the American Revolution, and is open to the public… 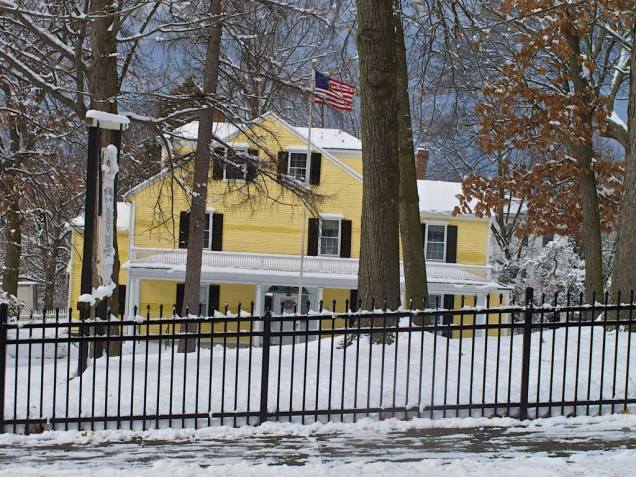 Holy Cross has a nice write-up on the house and its history:

“The Oaks”, one of the oldest surviving homes in Worcester is rich in both history, art, and culture. The building was begun in 1774 by Judge Timothy Paine (1730-1793), a member of the Colonial political elite. Judge Paine’s leanings were decidedly Tory as were those of his son William Paine (1750-1833) both Harvard graduates. With the advance of the American Revolution, Judge Paine deferred completing the residence, resigning his public roles to lead a quiet life in Worcester in his old house on Lincoln Street . It has long been suggested that Colonial troops occupied the house at some time in its unfinished state. William Paine who trained as a physician in Salem had married the social prominent Lois Orne of Salem in 1773, among whose wedding gifts was a lavish tea service by Paul Revere, the silversmith’s largest single commission. William left the country in 1774 after signing the infamous “Worcester Protest” (along with fifty other Worcester residents) arguing for the justice of British rule and continued his medical career in England and Scotland . He eventually served as surgeon general to the British army in North America . After the revolution he and Lois removed to Nova Scotia , moving back to Salem in 1787 when the ban against loyalists was lifted. They eventually returned to Worcester to settle into The Oaks after the Judge died in 1793.

END_OF_DOCUMENT_TOKEN_TO_BE_REPLACED

from  Beside Old Hearthstones, Chapter 3. 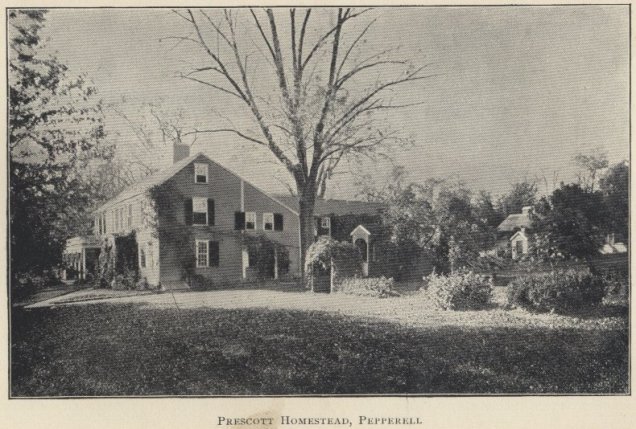 THE Prescott family home is on the northern border of the town of Pepperell, and on the rising around that soon merges into the hills of the Granite State….

…Weary with the tumult of war, Colonel William Prescott, in the spirit of a Cincinnatus, returned to his home, and resumed the peaceful employment of cultivating his paternal acres.

END_OF_DOCUMENT_TOKEN_TO_BE_REPLACED

In his book, Historical Sketches of Some Members of the Lawrence Family, Boston, 1888,  Robert Means Lawrence describes the location of the three Lawrence homesteads that were home to our family from the 17th century through to the mid-20th century. Keep in mind his references to “current” landmarks are well over a hundred years old, but I have added some notes from Uncle Johnny, John Endicott Lawrence Sr., to make locations a little more researchable.

The original Homestead at Groton, built by John Lawrence when he came up from Watertown, stood “southwest of Gibbet Hill, a short distance east of the First Parish Meeting House, and near where Love Lane joins the present road to Lowell. This farm has been for many years the property and residence of Joseph F. Hall.” [And, according to John Endicott Lawrence, Sr., was more recently owned by Marion Daniels. —LSL] See Historical Sketches, p.9.

John’s second son Nathaniel started out married life living in Sudbury with his wife, then moved back to Groton where he lived with his father for about twenty years, before moving in 1683 into his own Homestead, “on the ‘Mill Highway,’ so called, now the road to Ayer, about three-quarters of a mile south of the center of town and near the Indian Hills…. This estate is now the residence of William Peabody.” [According to John Endicott Lawrence, Sr., this land recently belonged to Mrs. Orick Bales. —LSL] In 1694, after a long series of Indian wars, with promise of more to come, Nathaniel moved his family out to Concord, and from there to Charlestown. The farm passed through several hands, until it was purchased again by Amos Lawrence in 1748. Amos’ children, including Samuel were born here, and when Amos died it went to his oldest son, Amos Jr. See Historical Sketches, pp.11-15, 93-94.