Oliver Prescott received less press in his lifetime than his world famous brother, but was in many ways an equally – if not more –  fascinating person, for reasons that the following makes clear. This is also from the Prescott Memorial, pp.59-60.

Doctor Oliver b. April 27, 1731 ; m. Feb., 1756, Lydia. daughter of David and Abigail Baldwin, Esq., of Sudbury, b. Oct. 15, 1735; ten children. He graduated at Harvard College 1750, and was distinguished at college for his literary attainments and correct deportment. He studied physic with Dr. Roby of Sudbury, who had been educated in Europe, and a disciple of the renowned Boer­haave, and was an eminent physician. He settled in Groton, his native town, and for many years was extensively patronized, not only by that, but by the neighboring towns. It is said by his biographer that he had a careful and trusty horse, on whom he would frequently sleep when deprived of his rest in bed. His distinguished professional acquire­ments; his prompt and unremitted attention to the sick; his tender and pleasant demeanor while treating them in their distress; his moderate charges and forbearance toward the poor, together with the general success which attended. his practice, operated to render him for nearly half a century, one of the most popular, while he was one of the most eminent and useful physicians in the Common­wealth. He was one of the original members of the Mass. Medical Society at its incorporation in 1781, and an hono­rary member of sundry medical societies. He was presi­dent of the Middlesex Medical Society during the whole period of its existence. 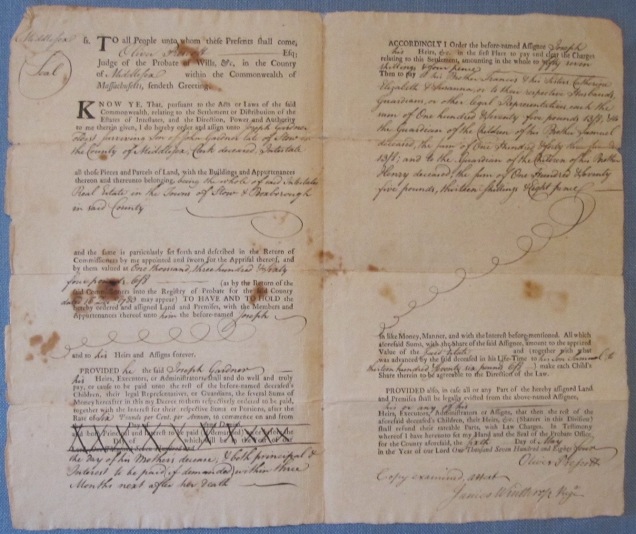 Dr. Prescott took an early and decided part in the American Revo­lution by entering warmly into those measures which were necessary to vindicate our national rights, and by assisting cheerfully and largely in their defence. He received many important appointments. In the militia he was appointed by the King a major, then lieutenant colonel and colonel. In 1776 he was appointed a brigadier general for Middle­sex county by the executive council of Mass Bay; he also was in the same year chosen a member of the board of war. In 1777 he was elected a member of the Supreme Executive Council; and in 1778 he was appointed the third major general of the militia throughout the Commonwealth. He was elected town clerk of Groton from 1765 to 1777, inclusive (13 years). Upon the death of John Winthrop. LL.D., in 1779, he, Dr. Oliver, was appointed his successor in the office of judge of probate, &c., for the county of Middlesex, which office he retained until his death.

In 1781 he was appointed second major general of the militia, but soon tendered his resignation by reason of other important duties. In 1781 Dr. Prescott received from government a commission to “cause to be arrested and committed to jail, any person whom he should deem the safety of the Commonwealth required to be restrained of his personal liberty, or whose enlargement. within the Commonwealth is dangerous thereto.”

Dr. P. was incorporated a Fellow of the American Academy of Arts and Sciences in 1780. Also, one of the trustees of Groton Academy, and the first president of the board. He was in stature full six feet in height, somewhat corpulent, and possessed and ever practised a pe­culiar suavity and politeness of manners, and a gentlemanly deportment, which strongly endeared him to the people, always commanding esteem and respect.

Dr. P. was not only respected for the above qualities, but the whole was sweetened by a uniform Christian life, and true devotion to the cause of Christianity, and the social virtues in which he and his wife walked together and adorned their profession by a well ordered life anti godly conversation. He possessed uncommon powers and versatility of mind, showing himself in all matters of difficulty, at once competent to its development and elucidation, by which he was enabled to dispatch business with surprising rapidity.

Prescott and his wife Lydia are buried in the Old Burying Ground in Groton, MA.