So far, in telling the story of our family’s involvement in the Revolutionary War, we’ve had ancestors who were founding members of the Sons of Liberty; who were Minute Men; marched to Lexington and Concord; officers who fought (on both sides) at Bunker Hill; were part of the Quebec campaign; were taken prisoner; wintered at Valley Forge; and were present at the surrender of Burgoyne.

Recently, I remarked in an email to my cousin, Elisha Lee, Jr., that – despite all this – to my knowledge, no one in our family had gone out that famous night, to The Boston Tea Party. One of the signal events of the Revolution in New England. It  is true that not everyone who was there admitted it, for fear of the repercussions, but still. Just something interesting to note.

After about twelve hours of radio silence, but no more, Elisha got back to me with one name: Capt. Joseph Lee, an ancestor we both share. He was there, and helped to dump the tea in the harbor.

I consulted several lists of known participants. (Here is one; here is another.)  Lee was mentioned on all of them. There appears to be no controversy. 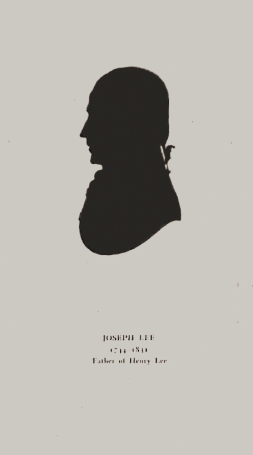 So who was he? As a youngish man, Joseph Lee was a merchant on Long Wharf. He had a fleet of privateer ships during the Revolution, which he seems to have used both to aid his country and enrich himself. In addition, he was a shipbuilder, an engineer of public works, a distiller, a gardener, and a philanthropist. He had two wives and numerous children. While not a lot has been written about the man, in the sense of memoir or lengthy biographies, it appears he lived a full life indeed.

Here are a few available items to guide further research.

“Joseph Lee was born in 1744 and was a merchant of Long Wharf when he participated in the Boston Tea Party. He was a member of the Massachusetts Lodge of Freemasons and achieved the rank of Captain in the Revolutionary War. He died February 6th, 1831 at the age of 86; he is buried at the Granary Burying Ground, Tomb 125.”

“Joseph Lee was baptized on May 13, 1744, the son of Thomas and Lois (Orne) Lee. Thomas Lee was a Harvard graduate and prosperous merchant in Boston and Salem, Massachusetts. Joseph was a sea captain, and merchant in Boston, Beverly, and Salem, operating his own merchant business with his in-laws, the Cabots, at the firm Cabot and Lee. During this time, he maintained mercantile trade with the West Indies and Spain. He was a merchant on Long Wharf in Boston when he participated in the Boston Tea Party. Joseph was also a skilled naval architect, and during the Revolutionary War he built a fleet of ships, which he sent out as privateers… It was during the Revolutionary War that Joseph achieved the rank of captain. As a shipbuilder, it was Joseph’s responsibility, upon receiving a contract for a ship, to supervise the entire building process to choose plans and carpenters, and to make all purchases of construction materials, rigging, etc. He built at least nine vessels from 1813 to 1816 for such notable individuals and firms such as Thomas H. Perkins, and Ropes Pickman and Company (see Appendix II). Joseph moved to Boston in 1807, and became a director of various banks and insurance companies. He designed, for free, the Essex Bridge, loved gardening, and donated $20,000 to Massachusetts General Hospital a year before he died. He was a member of the Massachusetts Lodge of Freemasons. Joseph’s first wife was Elizabeth Cabot, the daughter of Joseph and Elizabeth (Higginson) Cabot, whom he married June 9, 1769; they had twelve children together. Elizabeth Lee died in June 1783. Joseph married his second wife, Deborah (Higginson) Cabot, the daughter of Stephen and Elizabeth (Cabot) Higginson, on May 12, 1793. He died on February 6, 1831, and is buried at the Granary Burying Ground, tomb number 125 [alongside, or as part of, George Cabot’s tomb–LSL], in Boston.”

The scope and content of the papers are described by the Museum as follows:

Series I. Captain Joseph Lee (1744-1831) Papers documents his business as a shipbuilder, covering the years 1796 until 1831. Located in this series is correspondence regarding orders for ships, legal agreements with clients and workmen, accounts and receipts for construction materials, memorandums of ship dimensions, and drawings of hulls and ship decorations. Joseph’s correspondence also includes letters concerning farming and merchant correspondence, circa 1809 until 1810, which reflects Joseph’s and his son, Henry Lee (1782-1867)’s, joint investments in Calcutta goods. Of interest are letters, circa 1811, in which Joseph states his distaste of Napoleon and the thought of war with Great Britain. It should be noted that this series does not contain papers of Joseph’s important mercantile trade with the West Indies and Spain, papers of his ships, his distillery or his project to build the Essex Bridge.

from Famous Families of Massachusetts, Vol. One, by Mary Caroline Crawford, 1930, Chapter 14… 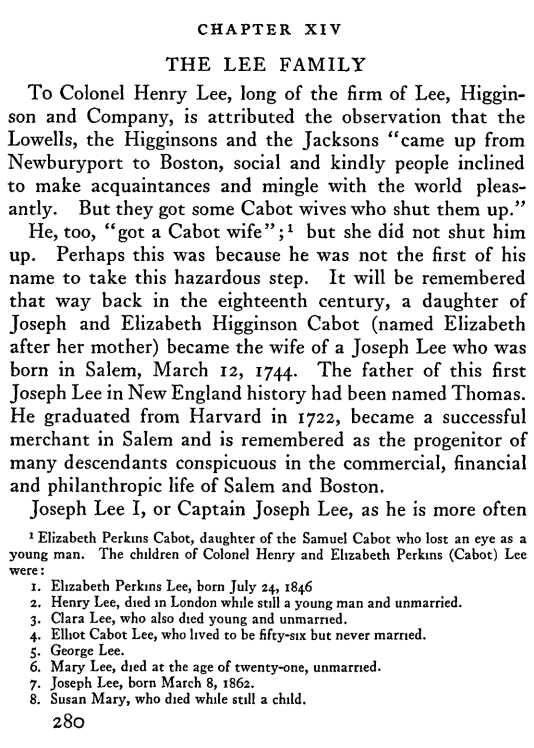 from The New England Historical and Genealogical Register, Volumes 76-77;  July 1922, pp. 205-6, there is this, which I have edited to eliminate redundancy with the paragraphs above.

…Joseph Lee was a sea captain, and a merchant of Boston, Beverly, and Salem, being in partnership with his kinsmen, the Cabots, among whom was his brother-in-law, Hon. George Cabot, in the firm of Cabot & Lee. He had risen from cabin boy to be junior partner in the firm…

…He designed without charge the Essex Bridge, and for this work he was presented with a silver pitcher by the proprietors, to his great disgust.

…His large desk is owned by his great-grandson, Joseph Lee of Boston.

OK. That is what I have for now. Consider this post a placeholder. This is definitely someone who should be looked into. 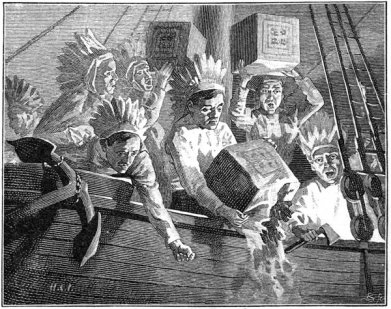 4 thoughts on “Capt. Joseph Lee and The Boston Tea Party”