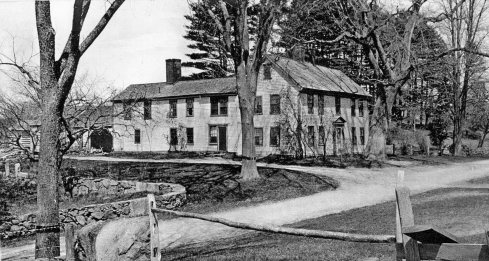 Among the notable families of Lincoln that did valiant service in the Revolution, and which are yet represented in the place, is the Farrar family, still occupying the old estate, on which are two dwellings that echoed the voices of anxious people on the 19th of April, 1775. Miss Mary B. Farrar, my informant, with others at the old home, represent the sixth generation in possession. The first family dwelling was built by George Farrar about 1692, and hence has sheltered the family almost two centuries. About the time of setting up his home at this place, a part of Concord, he was urged to settle farther to the interior of the country, and was offered one-half the present township of Southborough for two cents per acre, and went to see it; but on his return said it was so far in the wilderness it would never be inhabited. This pioneer, who lived until 1760, and his wife one year longer, was succeeded by a son, Samuel, who was born in 1708. Through his marriage with Lydia Barrett of Concord, the family became joined with one of historical interest. He lived to see the promise of liberty well-nigh verified, when he was succeeded by his son and namesake, Samuel, who was born in 1737, and whose marriage with Mary Hoar in 1772 made the interests of these towns more intimate. He was distinguished in the Revolution, and ever since appears in the records as “Captain.” He attained the age of ninety-two years, dying in 1829.

The family succession was continued by James, son of Captain and Deacon Samuel, who began life at this old home in the year of the Declaration of Independence, for which his father nobly fought… The marriage of James Farrar, first with Nancy Barrett, and later with Mary Fiske Hoar, continued and strengthened interesting family history… The second James, born in 1820, kept the record unbroken, and aided in maintaining the family integrity. He married Adeline Hyde in 1845; and their children occupy the old dwelling, which they sincerely cherish, as does another branch of the family, occupying another dwelling of much historical interest.

Judge Timothy Farrar, who died in 1847, aged one hundred and one years and seven months, said of his birthplace, when asked as to its age on his centennial, “You must ask some one older than I; it was an old house as long as I can remember.”

Samuel Farrar, with his wife, Lydia Barrett, both advanced in years, and their son, Samuel, with Mary Hoar, his wife, were all living on the old homestead at the opening of the Revolution. The home was but a short distance from the village of Concord, and the reader can imagine that whatever affected the people of the mother town touched the vital interests of these families in Lincoln…

In the 1950s, the last Farrar relative to own the house came to the unfortunate conclusion that it was not worth saving, and decided to do what the British had not.

Enlisting the help of the Lincoln town fire department, the venerable old house was physically knocked down and the ruins burned.

Pieces of its furniture and other objects, though, have survived, and today are included in the collections of the Smithsonian and Winterthur.

Fast forward half a century or so, I recently set out to learn the location of the house, or rather its former location. It was a short search, thanks to a hand drawn map in an article by Kathy Garner at fpond.org, which labels the structures of the neighborhood, as they stood two hundred years ago. (If you read her article, scroll to the map, and look just south of the crossroads, and north of the area marked “Oakey Bottom.”)

Based on this, and comparing with a modern street map, it would seem the house was at – or just north of –  217 Concord Rd./ Route 126, on the west side of the street, in Lincoln.

Indeed, according to Ms. Garner, it was on “a spot near where mailboxes for 216 and 217 Concord Road now stand.”

Here is the (probable) site on Google Maps, to a first approximation.