Gertrude Peabody’s memory was virtually erased from our family’s oral history, for reasons that can be only guessed at, and restoring a sense of who she was has been difficult. The scraps that follow represent all the fragments I have been able to assemble. Perhaps someone will turn up a collection of her letters, or some other trove, and someday we will have a chance to know her a bit better…

There is a wonderful sepia photograph, retouched with pastel, of Gertrude Lawrence Peabody in the dining room at Dark Harbor. It belongs to Lee Albright. It shows the same strong face and jaw so admired in Grandfather [James Lawrence 1907-1995—LSL]. 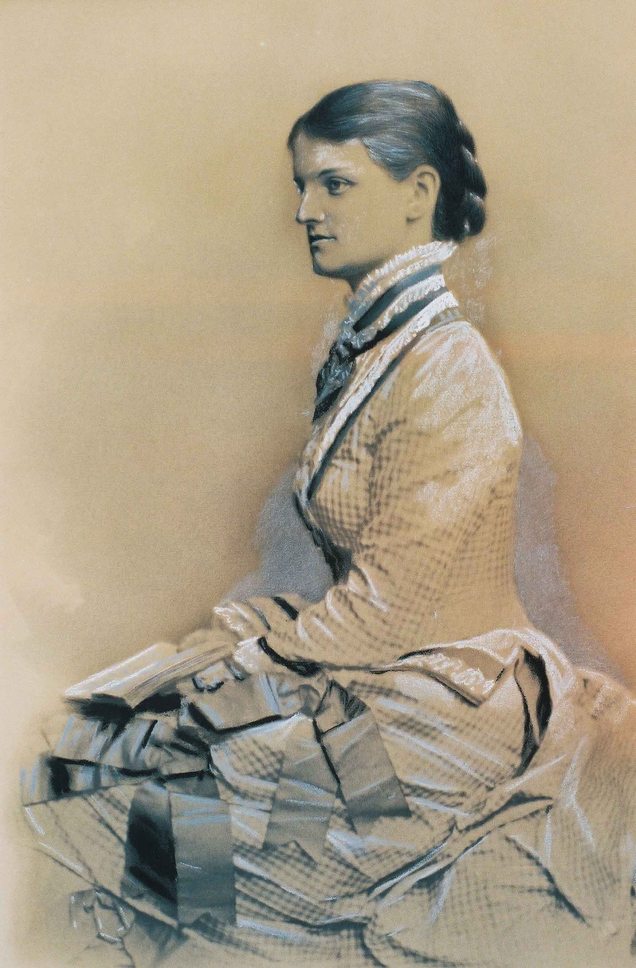 Lee told me, in August, 2001, that she had often looked at the portrait and wondered how Gertrude had died, since she was only 28. She said that Grandfather had often wondered the same thing. This piqued my interest, and I then began the process of looking into not only how this woman died, but who she was while she was alive.

First, her life. Or what little we know. Gertrude’s father had lived the latter portion of his days in England, debilitated by an unknown, or unrecorded, illness. She cared for him there as an invalid. He died in 1875, and that would have meant she was abroad at the same time that her future husband, John Endicott Peabody, was rowing for Cambridge. Was this how they met? It seems logical. At any rate the two were married on June 15, 1878 at Trinity Church in Boston. Phillips Brooks performed the ceremony. Gertrude was 23. Subsequently, she and J.E. Peabody made their home, among other residences, at 80 Commonwealth Ave. In time, they had two children, Marion Lee and Harold.

Now for what can be learned about her death. Evidently, she died in Boston, May 2, 1883, at her residence at 80 Commonwealth Ave. The entry recording her death in the Mass. Vital Records states the cause was “Internal Haemorrhage; Disease of Kidneys & Blood.” [Deaths, Vol. 348; Page 121; No. 54.]

This raises the question, hemorrhage from what? Was more known at the time, and this was simply a clerk’s shorthand, or was this the final word in an era of fairly crude disease models, and no medical imaging? There are other questions… Who made this diagnosis and/ or which physician attended her? Was there an attempt to save her by surgery? Or, owing to the fact that surgery was so dangerous as sterile technique was not then used, was this felt to be of more risk than benefit? Was there any documentation of care at the bedside, or perhaps a certificate of death signed by a physician? Was there an autopsy? Have these or any other official papers survived?

Based on the small amount of information the above affords, we might speculate that her death was due to an ectopic pregnancy, though there are of course numerous other possibilities.

In the hope of at least learning the circumstances leading up to her death, and therefore getting more clues as to her diagnosis, I sought out her obituary. There was none in the Boston Evening Transcript. I later learned that even if an obituary exists somewhere, unfortunately, obituaries of the period only infrequently mentioned cause of death. This was felt to be indiscreet. To be thorough, though, other contemporary papers such as the Globe, Herald, Traveler, Post, Journal, Currier, and Advertiser still need to be checked. The odds of success here are long.

On May 4th, 1883, there was a two or three line notice in the Transcript of her impending funeral that coming Saturday at Grace Church out in Salem, and it included the schedule for the funeral train that would transport mourners. She was buried there, in Harmony Grove Cemetery, first in Francis Peabody’s Lot, No. 1158; later her body was moved so as to be with her husband’s family, in the Peabody Lot, No. 1553.[1]

A conversation with Uncle Johnny [John Endicott Lawrence, Sr.] on Sep 18, 2001 didn’t reveal much more. He told me, as I noted above, that Gertrude’s father was an invalid, and that in her teens/ twenties she basically attended him. He also echoed a comment made by Lee Albright the same day. Evidently, there were at most three times you were supposed to be mentioned in the newspaper: at your birth, at your marriage, and at your death. Not much of a surprise then that nothing else was written about her passing other than a schedule for the funeral train.

Finally, what – for me – was an interesting discovery…

The site of the Groton School was determined by the gift of ninety acres of rolling Middlesex farmland by Mr. and Mrs. James Lawrence in memory of their daughter Gertrude, the wife of Endicott Peabody’s oldest brother John [48], who had died on 2 May 1883…”

This fact, that the gift of the land for the Groton School was actually in memory of Gertrude Peabody, was—despite the legions of Lawrences that have attended that school—never mentioned or discussed when I was growing up.

The author and genealogist Scott Steward has told me, though, that it is a connection that is frequently mentioned at the school itself.

I’ll close with a theory on why this strong and beautiful woman fell out of our collective family tradition. It is just a guess; conjecture; nothing more.

Owing to the fact that she died so young, and her husband remarried, no one of her generation wanted to chafe against the second wife by recalling and telling stories about the first. Worse, her own children – Marion and Harold – were mere toddlers when she died, and probably retained few actual memories of her. The gift of the land at Groton was a memorial of sorts, but not personal enough to be repeated, orally, from person to person. So over time, as no stories were told, no stories were retold. This would explain my grandfather and Uncle Johnny’s near total ignorance on her… two men who indeed not only deeply respected their forbears, but prided themselves on their recall of family lore. The result today is that this person has been mostly lost, at least for the time being, to those who might otherwise wish to keep her memory alive.

I don’t know that we will ever have enough information to truly “see” her, but I keep a copy of her portrait in my house. From time to time, I look at  it and try to imagine something of what she might have been like.

In my mind’s eye, I picture her sitting on the porch at the Homestead in Groton, and as the sun goes down, looking out over the low black hills. In the fading light, I see the shadow beneath the firm line of her jaw, and the natural poise in the way she sits. A drink in her hand, she enjoys a relaxed conversation while keeping one eye on her nephew, James (the future Mr. Grand), and one on her daughter, Marion— the two children playing out in the field and, little by little, getting lost in the gathering dusk.

[1] As an aside, I also noted the following while reading just three days of that paper…The Transcript on the 2nd notes recent news by telegraph of the death of the controversial French painter Manet. On the 3rd, there is a brief piece on General Crook heading south into Mexico to search for Apaches. Geronimo (whom he was chasing) is not mentioned. Evidently not yet famous. An obituary of a man named Mark Dennett states he first voted for Thomas Jefferson. A small listing alerts readers to the impending arrival of Harriet Beecher Stowe from her winter residence in Florida. Finally, there is an impassioned piece on the insanity plea in murder cases, and the danger of labeling someone mentally ill, only to pronounce him “cured” and release him back into society where he could do more harm. Evidently a mentally ill murderer, who had been treated medically and not within the criminal justice system, had just been released and had killed again. Could’ve come from last week’s New York Times. Finally there was discussion of what to do with a little girl who was setting fires… –LSL.