Who gets remembered, and how? Who tends, not just our graves, but our reputations?

When I was really young, and we were misbehaving at dinner, we would sometimes hear mention of an “Aunt Libby” who used to, so the story went, after a long meal, dance on the table. Some accounts were…shall we say…more risqué than others.

In those moments, the mental picture this conjured made us laugh, but no one ever asked much more about her. A silly, old, dead relative.

Other times, other stories. Some of these had to do with “boys at Groton,” and the like.

When someone told me it was her residence in which the Sargent portraits of James and Caroline Estelle Lawrence had burned, the information was imparted with a knowing look.

It occurred to me, maybe fifteen years ago, as I tried to really assemble all this family history material, that there were no pictures of her. I had never seen even one, which was funny. Funny– meaning odd.

Was there a reason for this, or just coincidence?

Puzzled and curious, I started to look and here is what I found.

Libby – Elizabeth Prescott Lawrence – grew up on the Lawrence Homestead in Groton.  She can be seen in several of her mother’s photographs of their family life. These are some cropped images.

As a young woman, Libby was active in both Boston and London society. She was said to be blond and beautiful, and her female friends included the daughters of presidents (plural).

In mid-1907, she published a tribute to the island and houses and families of Islesboro, Maine. I learned about this when I ran across a list of papers in the archives of Eleanor Roosevelt. (A reproduction of the article can be found here.) 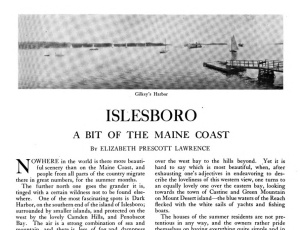 Here are a few lines,

A century later, give or take, I’ve often stood on exactly that line of coast, in the pitch black, looking up.  She more than did it it justice.

Through the miracle of writing, I imagine that I am back in the early 1900s, hovering somewhere nearby as she takes it all in, her spirit reaching to the universe.

It’s a very human moment she conjures. Not the stuff of unkind caricatures, or scuffed sepia photographs, but of a living, breathing, wondering person whose whole life was entirely ahead of her.

Later that same year, in November of 1907, Libby Lawrence married.

Her wedding, when described in the Boston papers, featured one word, in multiple articles, over and over again: “Surprise.”

Evidently, despite all the pressures for a large gala-type celebration, she and her husband, Nathaniel Emmons, were joined by the town clerk in Ayer, with family members only notified after a train ride to Boston.

It’s tempting to make guesses about this, but who really knows?

In a magazine called Marsh’s, from 1908, I found what I had originally been looking for. A photo of Libby as an adult.

The magazine page, as I came across it…

After WWI concluded, Libby opened her estate in Hingham to house the most grievously wounded combat veterans.

In recognition of her generosity, many of these men called her “the angel of the 26th.”

Then, on or about the 18th or 19th of September, 1923, something that I had never seen in all the lives I have recorded here. An extortion attempt.

Was she a victim– punished for her good works with WWI veterans? Or was this a genuine scandal? The papers seemed to play it down the middle, with plausible deniability in both directions.

Here is one article covering what happened.

Another edition of the Globe, also on Sep 22, featured two articles, one recapping the extortion attempt, but a second giving extensive background on her work with the vets. 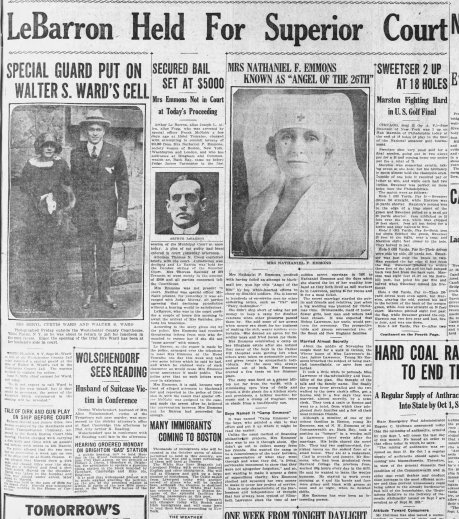 Here is a sample.

And a better view of the photo used.

When the day finally came for her to testify against the man – Le Barron –  in court, she was said to be visibly distraught, showing “nervous strain and agitation.”

I don’t know how it all ended.

During the stock market crash, Libby, like many, lost a great deal, perhaps most, of her inherited wealth.

In April of 1930, she appears to have signed on for a product endorsement of Fro-Joy ice cream.

The second photo, shown below, is amazing in the resemblance she bears to certain living family members.

Also, in May of that year – 1930 – her husband, Nathaniel Emmons, died after a prolonged illness.

In 1932, she formed plans to open a car dealership, but it looks like that soon fell through.

Later, also in 1932, she mounted an art show, which was well reviewed…

Six years passed, and then came the fire in which the portraits of her parents by John Singer Sargent were destroyed…

What were the circumstances of the fire? What really happened? I think that has been lost, or soon will be.

In 1947, Aunt Libby was laid to rest alongside her husband.

I have not been able to find an obituary, and I’m not the one to write one now.

My hope for this post, though, is that her memory is a little greener and posterity records what seems self-evident: that Libby Lawrence Emmons was an intelligent, creative, passionate, generous soul, who – vulnerable and reckless – made her share of mistakes and paid for them all, but who tried her damnedest.

At least, if she had great-grandchildren alive today, I like to think that’s what they would say.