There are only a handful of extant photographs of the first and second generations of the Burgin family in America, as they would have appeared in the late 19th century. These shown below are all the ones I know about.

Perhaps, given their somewhat limited financial means, Thomas and Jane Burgin and their children viewed formal portraiture as a rare luxury, and personal photography as little more than a curiosity– a technical and possibly expensive hobby.

All that would change, though, in fairly short order.

By the time Clarence Burgin and Minnie Morton Rodgers had been married a decade, in the early days of the 20th century, the family was using cameras with a vengeance: amply documenting adolescent acrobatics on the lawn, picnics, neighborhood friends, and camping trips. Who would’ve thought? Burgins as early adopters!

In a week or so, I’ll have a post devoted to those albums. For now, though, the first few portraits… 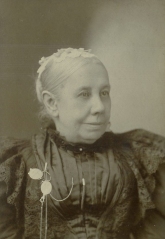 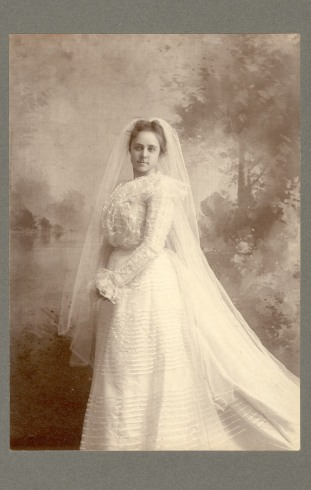 Clockwise from left, the immigrants Thomas and Jane Skudder Burgin, (probably) Clarence Burgin as a youth, Minnie Morton Rodgers in her wedding gown, and lastly, Minnie Morton Rodgers, much as my grandfather would’ve known her growing up…  He once told me he would playfully take her hand and invoking a popular dance at the time, ask, “Minnie won’t you shimmy with me?” He loved the story.

As an Addendum, and partially because I have no where else to put it, there is also this (courtesy of Elisha Lee): Thomas Burgin’s patent for a curtain-fixture, #99,837, granted less than a decade after arriving on these shores. As Grampa would have said, “No flies on these people!”